Objective of the project

Develop, professionnalize and consolidate the microfinance sector in Cabo Verde.

The Luxembourg Directorate for Development Cooperation and Humanitarian Affairs

Cape Verde is one of the beneficiary countries of the Indicative Cooperation Programmes (ICP) which are delivered by Luxembourg Development Cooperation. The ICP signed with Cape Verde covers a wide range of activities in different sectors. ADA is responsible for the execution of the part of the programme dedicated to the development and deployment of inclusive finance throughout the archipelago, in collaboration with the governments of Luxembourg and Cape Verde.

The cooperative relationship which exists between Cape Verde and Luxembourg goes back to the end of the 1980s and in 1993 Cape Verde became a key partner country of the Luxembourg Development Cooperation.  The bilateral activities of the Luxembourg Development Cooperation in Cape Verde are implemented by LuxDev and ADA. The fourth Indicative Cooperation Programme (ICP IV) covers the period 2016 to 2020 and was signed in March 2015. ADA is responsible for the execution of the part of the ICP programme called “Project to support the development of inclusive finance”, whose aim is to facilitate and increase access to inclusive and quality financial services for the people of Cape Verde.

Our action in Cape Verde is therefore carried out in close collaboration with the governments of both Luxembourg and Cape Verde, with a view to creating an environment which is favourable to the development of the microfinance sector throughout the archipelago. This approach to development is designed to be participatory and, as such, it requires the collaboration and involvement of all of the actors: the governments and regulatory authorities, the representative bodies in the sector and the microfinance institutions. 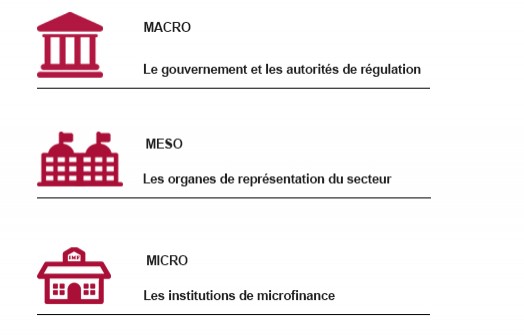 These different levels of the sector work together in order to ensure that microfinance develops in a coherent and cohesive way. In order to provide the best possible support to each level of the sector, ADA has opened an office in Praia, which is managed by a technical advisor and a coordinator. The project strives to create synergies with the existing inclusive finance networks so as to be able to benefit from economies of scale and the international experience held by the networks.

The objectives at the MACRO level

The governments and the regulatory authorities provide an appropriate environment for the development of the microfinance institutions and a framework for dialogue between the various actors involved, notably through:

- the revision of the law: the law regulating the sector has been revised in order to be more conducive to the development of microfinance. It was approved by Parliament in November 2014. This law clarifies the allocation of the roles of the various authorities, notably the role of the Central Bank, which is responsible for supervising the application of the law and the creation of tools designed to facilitate and harmonise the financial reports of the MFIs.

Objective within the framework of ICP IV: the effective application of the new regulatory framework adopted in 2014 by all levels of the sector.

The objectives at the MESO level

The sector’s representative bodies make it possible to clearly identify the common needs of the MFIs. They carry out research as well as training for all of the actors.

The FAMF (Federation of Cape Verde Microfinance Associations) is the main representative body of the inclusive finance sector. It is a professional association which represents the interests of its member MFIs, which are present across the entire archipelago. The aim of the FAMF is to create a favourable environment for their development so that they are able to provide appropriate services to the populations which are excluded from the conventional banking system. The FAMF is currently undergoing a process designed to professionalise its activities and services and to increase its visibility at the national level so that it is recognised as a leader in the development of the sector and in both dialogue and interaction with all of the stakeholders.

The FAMF has already carried out several actions designed to help it to achieve this aim; these actions include the opening of a documentation centre, the creation of a website, the establishment of a four-year strategic plan and an impact study of the microfinance sector in Cape Verde in collaboration with the UNDP-Praia agency.

Objective within the framework of ICP IV: to ensure the efficient management and coordination of the sector.

The objectives at the MICRO level

The MFIs are currently working on the development of their provision of products and services. They are being supported in these efforts by the two types of actors previously mentioned

The MFIS are also striving to become more professional and to improve their degree of self-sufficiency by applying the good practices which already exist in the sector. With this aim in mind, the MFI members of the FAMF have benefitted from the introduction of a computerised management system, training on governance, management and information systems and accounting, as well as specialised training courses for their credit agents.

Objective within the framework of ICP IV: to ensure compliance of the MFIs with this new regulatory framework and their respect of the good practices.

Discover the evolution of microfinance sector in Cabo Verde and 7 of our MFI partners through these videos! You will have the opportunity to know their history and how they work every day to offer a quality service to their customers. In most cases, the clients of these MFIs are women who, thanks to the loans they have obtained, have been able to improve their lives and those of their families, make a dream come true and show themselves and others that they can do great things.

Enjoy your Cabo Verde tour through our partner institutions!

The association SOLMI was established in 1991 with the aim of responding to the most immediate needs of the low-income population, particularly women heads of household, single mothers and unemployed young people with technical training or business experience.

ASDIS was established in 1999 on the island of Santiago. The Cooperative targets women, single mothers, heads of households, women victims of domestic violence and young people seeking employment and encourages the creation of income-generating activities.

FAMI-PICOS is an Association created in 1997 to support families living in difficulties, by providing microcredits, mainly in the sectors of agriculture, breeding, trade and housing.

The Cabo Verde Women's Organization (OMCV in Portuguese) was founded in 1981, when Cabo Verde Women's Day was established. At the time, it was the only organization working for the emancipation of Cape Verdean women. To date, OMCV has granted 22,000 credits, benefiting approximately 18,000 women and 4,000 men.

Citi-Habitat is an organisation created in 1988 which intervenes in the sector of microfinance, training, social and solidarity economy and social housing. The new microfinance law allows Citi-Habitat to transform the microfinance service into a cooperative for the promotion of financial inclusion, CITI-COOP.

Created in March 1992, MORABI, that stands for Association for the Support of Women's Self-Promotion in Development, works mainly to empower Cape Verdean women through microfinance programmes.

Soldifogo was founded in 2002 on the island of Fogo with the aim of providing microfinance services, while promoting entrepreneurship based on guidance, training and assistance throughout the process.