Promoting good social performance management practices is an integral part of ADA's mission. For this reason, ADA has been working for years with its partner MFIs but also with networks and the sector in general to encourage the evaluation and improvement of the social performance of inclusive finance actors.

For the last fifteen years or so, ADA has been actively investing in the promotion of social performance and transparency in the inclusive finance sector. From 2003 to 2013, ADA coordinated the Rating Fund and Rating Initiative projects which were designed to encourage MFIs to carry out financial and social ratings. These projects involved several donors and allowed the MFIs to apply for co-financing to cover a part of the costs of the ratings. The projects were designed to last for a limited amount of time to allow the ratings sector to become established and some activities were then transferred over to the African Microfinance Transparency (AMT) Forum, which ADA supported with a view to continuing the efforts to strengthen the ratings culture in Africa.

Internally, the ADA Investment team makes systematic use in its analysis process of the SPI4-Alinus tool, which is the version of the tool which has been adapted for use with investors. This means that MFIs are required to prove that they are managing their social performance correctly in order to be eligible to receive financial support from the LMDF, which is the social investment fund established by ADA. The teams which provide technical support to the MFIs and professional networks also regularly schedule social audits based on the SPI4 with their partners. The aim of these initiatives is to encourage MFIs to review their practices in this area and to improve them.

This increasing use of the SPI4 tool has enabled ADA to analyse the social performance management of the MFIs it has supported in 2017 and to compare it to other MFIs which have carried out an SPI4 and about which Cerise has information. The results of this analysis carried out by Cerise show that the MFIs supported by ADA have achieved a higher level of social performance management than the average level achieved by the other MFIs. This confirms the commitment made by the investment team to promote good social performance practices and also makes it possible to identify areas for possible improvement and the potential needs for technical support for the partner MFIs. 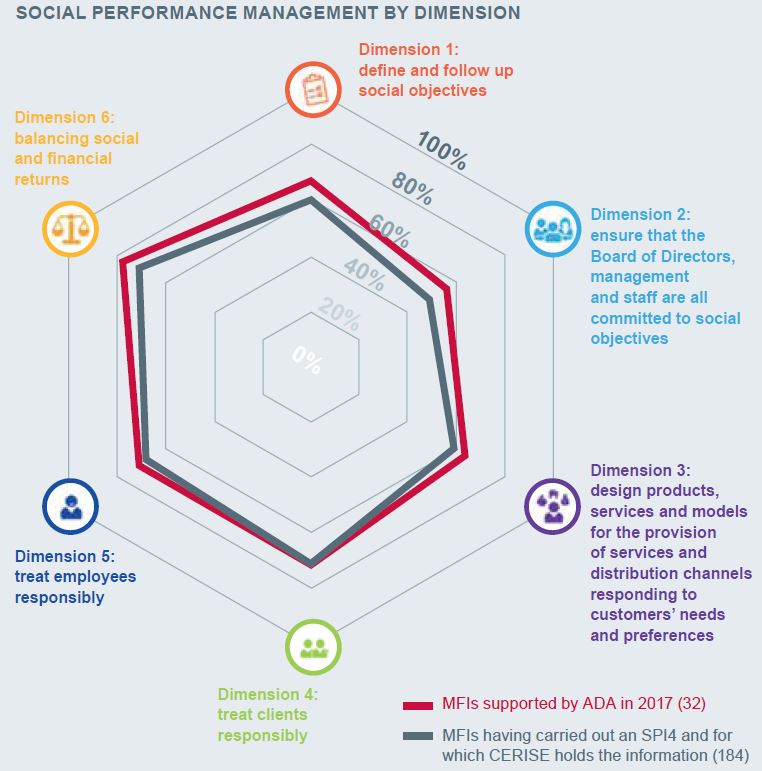 Categories
1: Define and pursue social objectives
2: Ensure that the Board of Directors, the management and the staff are all committed to social objectives
3: Design products, services and models for the provision of services and distribution channels which respond to customers’ needs and preferences.
4: Treat clients responsibly
5: Treat employees responsibly
6: Establish a balance between social and financial returns

Since the end of 2016, ADA has also been engaged in an ambitious project to create an online platform designed to centralise the data taken from a range of tools, such as ratings, SPI4, Factsheet, etc., regarding the social performance of MFIs across all the continents. The aim of this project, which is coordinated by Microfinanza Rating and financed by ADA, the French Development Agency and the Swedish Development Cooperation Agency, is to promote transparency and good practices in terms of social performance management in the inclusive finance sector.

LEARN MORE ABOUT THE DATA PLATFORM