In May 2018, ADA and its partners, the PRISMA MFI, which is a savings and credit cooperative, and the PRISMA NGO, launched a project to boost the cocoa value chain in San Martin in Peru. This is the largest cocoa producing region in the country, accounting for 80% of national production. There is an extremely high demand, both on national and international markets, for Peruvian cocoa which is known as “brown gold” and is famous for its organoleptic properties.

A variety of support programmes, such as Alianza Cacao, which was established by a public private partnership some 20 years ago, have made it possible to significantly increase cocoa production in the region, from 344 tonnes in 1997, to 43,000 tonnes in 2016. Despite these efforts, producers in San Martin continue to struggle to meet with the high market demand due to the low yields produced by their crops. These difficulties are the result of the inefficient maintenance of the plots of land and the lack of human and financial resources required to reproduce the good practices passed on to the small producers.

As a response to this situation, ADA and PRISMA have joined forces to develop a project to boost the cocoa value chain. The project contains three components:

ADA carried out its first mission in July 2018 when it met with the various producers’ organisations which are partners in the project and began to work with the local team on the implementation of the project activities. 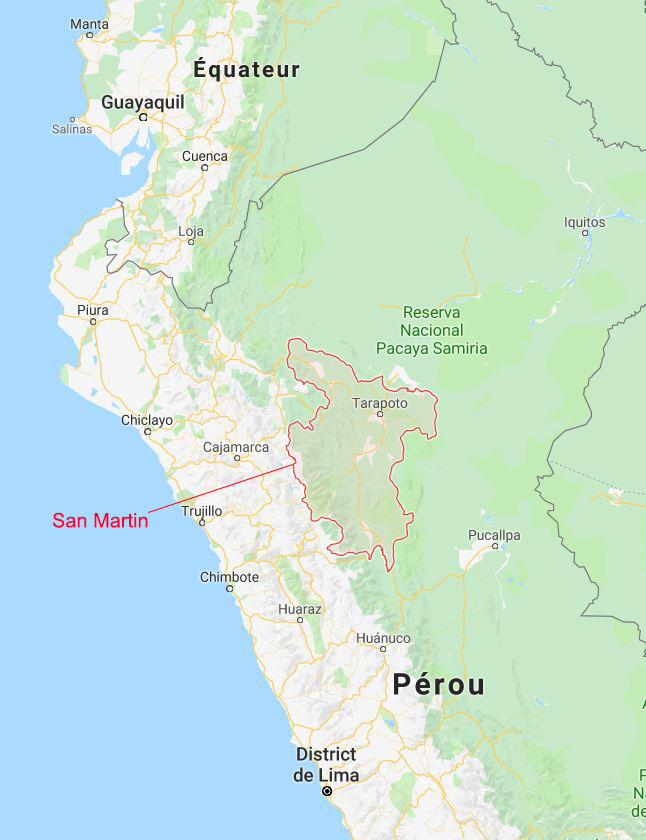 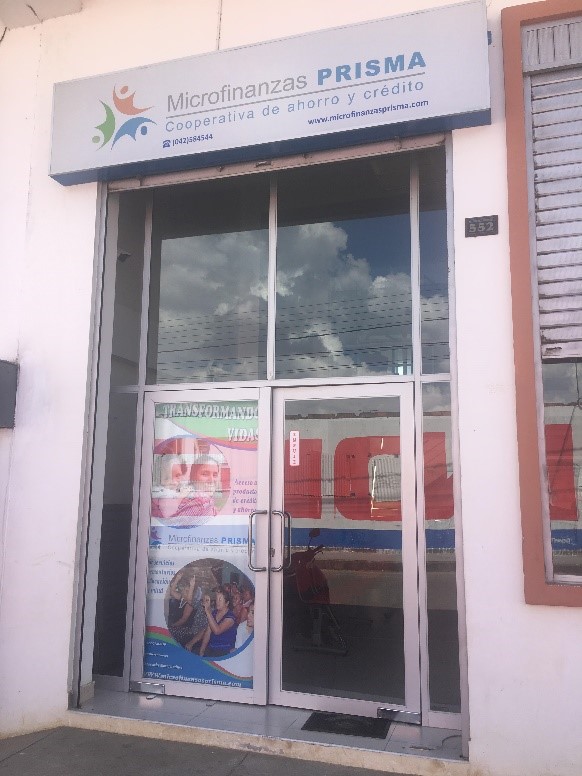 The cocoa sector in context:  a major economic challenge with stagnating levels of production

“What was it like here in the 1990s?”, asks Luis, the director of the local agency of the Prisma MFI in Tarapoto. “In the 1990s there were coca leaf plantations everywhere. Everyone grew coca leaves. It wasn’t hidden, it was completely normal”.

In the past, when they were controlled by the cartels, cocoa was a profitable alternative for the small producers in the San Martin region. Today, cocoa production represents a major element in the region’s economy. Production continues to be fairly low, with yields of 600 kg of cocoa per hectare, compared to a standard production of 3,000 kg per hectare in other areas. This means that it is very difficult for the farmers to earn a decent income.

Over the last 15 years, the producers have received technical assistance in the form of training, awareness raising and practical field demonstrations thanks to the support programmes. So why do the yields continue to be low, despite the information provided on good farming practices? One of the project leaders provides some elements of the response to that question: “the knowledge acquired by the farmers is rarely applied in the field. As well as a lack of financial resources, we are also faced with a lack of trust”.

“It is not our intention to either compete with, or replace, the actors who are already helping the farmers. On the contrary, we want to work with them and to draw upon the work they have carried out thus far”, continues the agronomist who has been specially recruited to be the project’s agricultural coordinator. “It is therefore important for us to be able to meet the actors involved so as to be able to present our project and to share this information”.

1. Focus on an innovative form of technical assistance: the Chova Chova system

The Chova Chova system is an ancestral concept attributed to the inhabitants of the Amazonian forest and means "I help you, you help me". According to the official definition, Chova Chova is a custom, activity or law of mutual support and solidarity between people of the same community.

As Marina, project manager for ADA, explains, "Through this project, we needed to find an innovative way to ensure that this knowledge was effectively applied by cocoa farmers. The concept of Chova Chova is well known to the people in this area, but was abandoned during the period when drug traffickers controlled San Martin province. We hope that the return to this solidarity system will allow producers to become strongly involved in the maintenance activities of their plots".

So, the Chova Chova system is a system based on mutual aid between the farmers to provide the workforce required to maintain the plots of land on which they grow cocoa.
The principle to be implemented by PRISMA and ADA will consist in forming groups of farmers, in collaboration with the selected cocoa cooperatives, to work on each of the four key activities which need to be carried out to maintain the plots: pruning, fertilization, weeding and disease control. Farmers will be appointed from each cooperative to lead this work and to train their group of 10 to 15 farmers from the same geographical area. 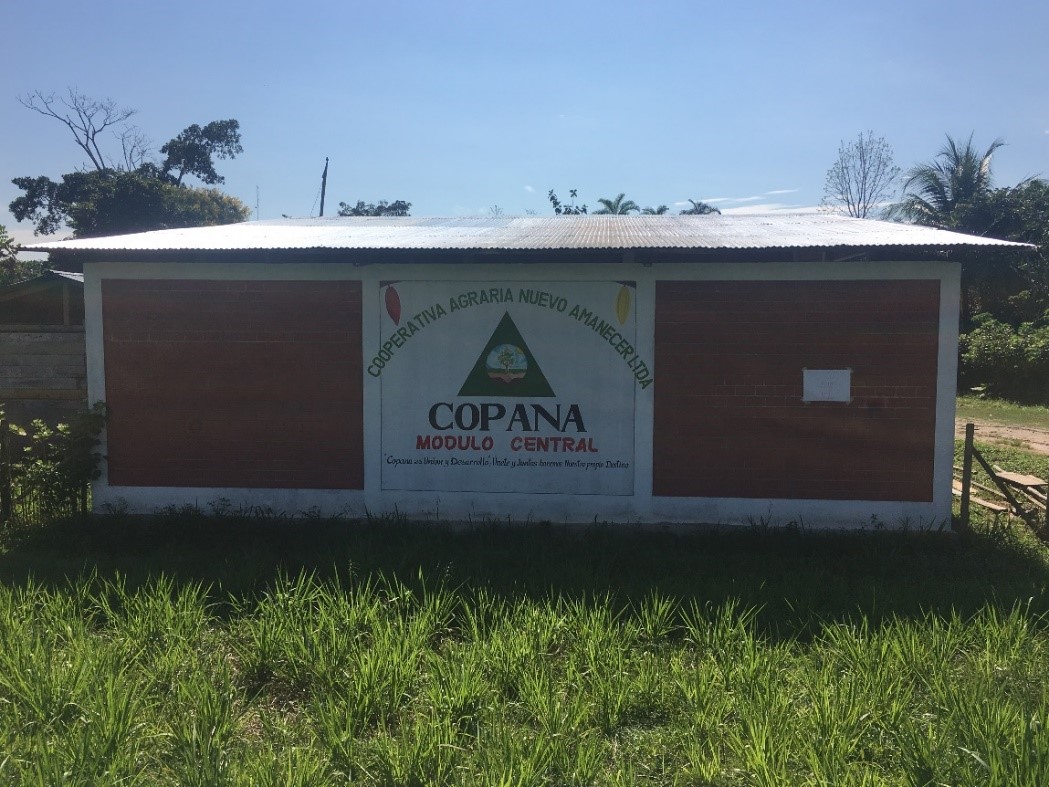 COPANA is a cocoa production cooperative. Its members are passionate about their
profession and are doing their utmost to make their cooperative as dynamic as possible
and to make it financially viable. 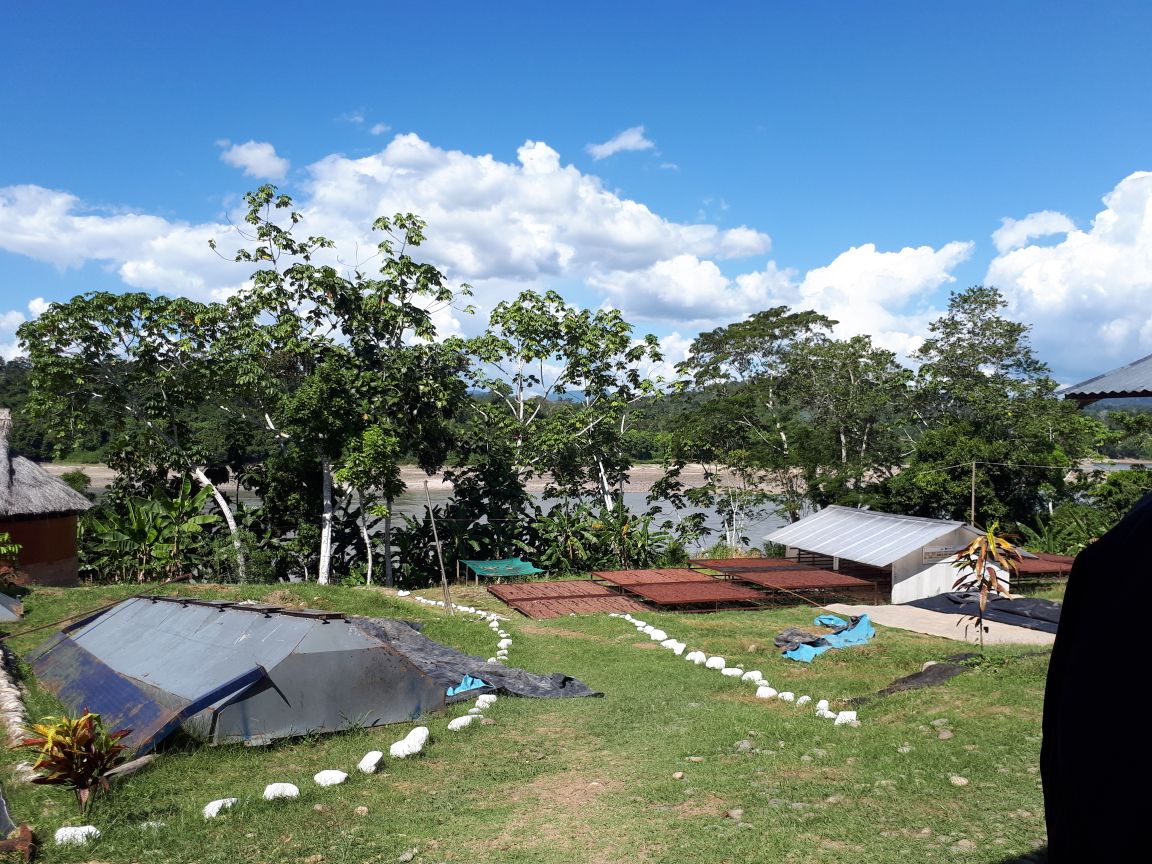 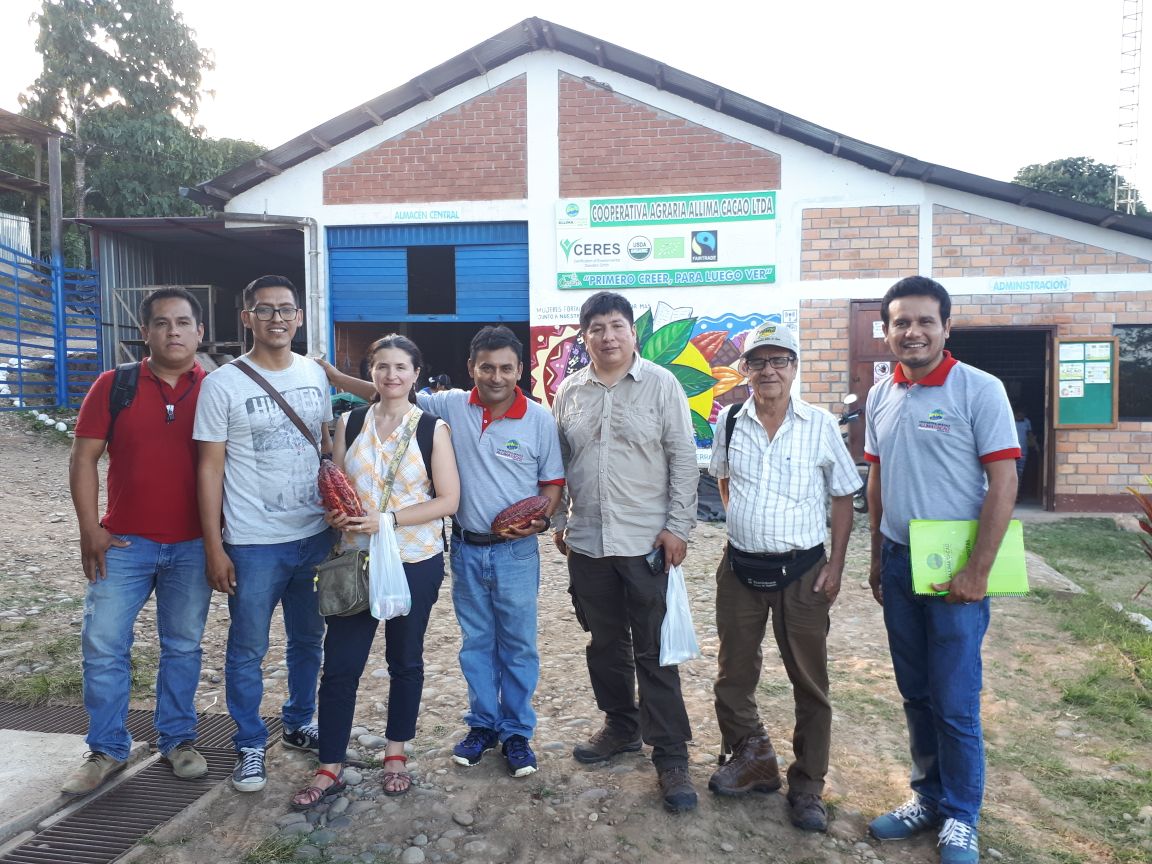 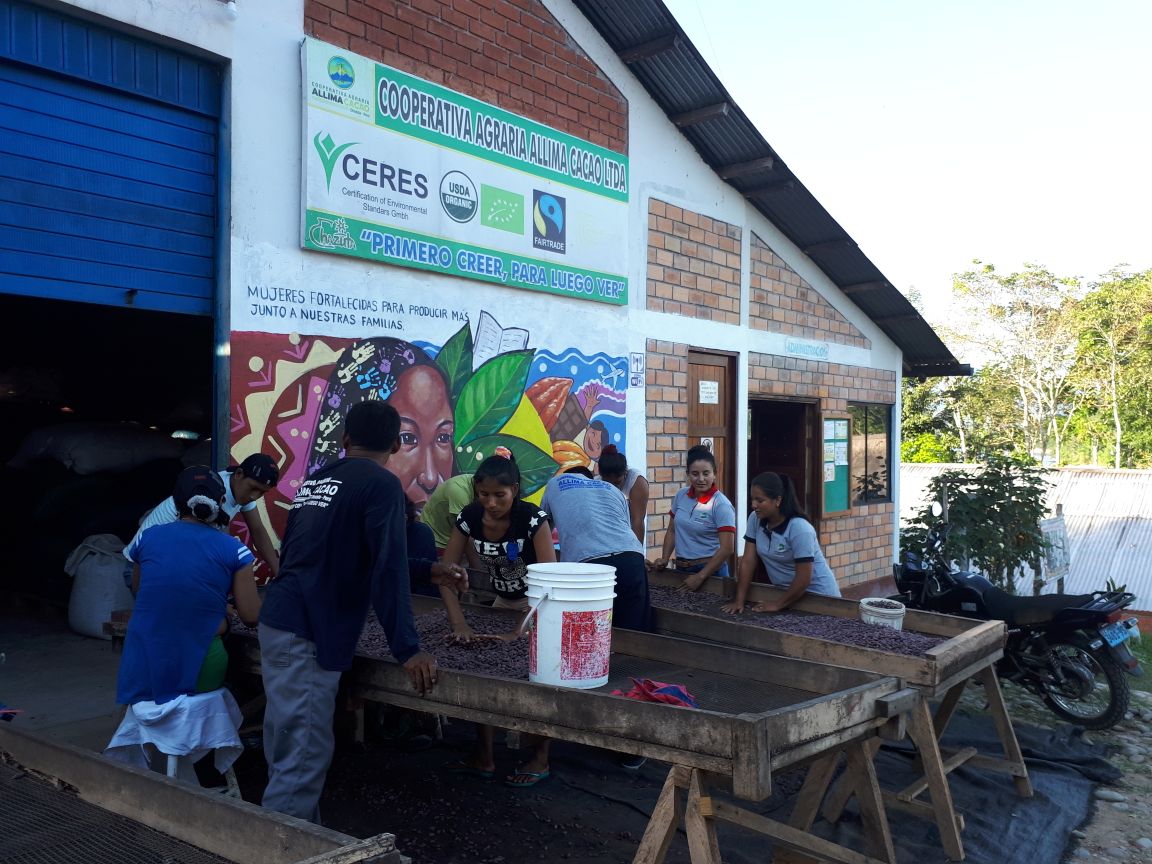 The mutual aid will be performed first of all on the group leader’s plot of land, where an initial activity take place (pruning the trees for example). The group of farmers will attend a demonstration managed by an agronomist, who is a cocoa specialist, who will show them how to prune the trees so that the fruit can develop correctly, whilst at the same time minimising the risk of diseases which could have a negative impact   on the growth of the trees. The group will then implement the agronomist’s recommendations on the group leader’s plot of land, before repeating this same activity on land which belongs to another member of the group and so on.  ADA’s project manager, Marina, believes that this is beneficial method: “it will allow the farmers to become familiar with the techniques so as to replicate them independently on their own plots without the help of the agronomist”.

This system will be repeated each time a new activity is introduced (fertilization, weeding or disease control). “Since each activity will be carried out at a specific time in the year, the project coordinators will ensure that each group has carefully established its own schedule and that it carries out the maintenance work in good time, using the necessary workforce”, the ADA project manager continues.

The aim of this pilot phase, which will run until July 2019, is to provide support, in the first instance, to some thirty groups, in other words close to 300 farmers, before extending the project to other farmers and cooperatives if it is successful.

2. Development of a new financial service for cocoa producers

Putting these good practices into place requires bringing in inputs, which are mainly fertilizers in the case of cocoa. The farmers therefore need to take out a loan, which the banks are very reluctant to grant because the farmers do not necessarily have the capital required to serve as collateral for the loan.

As a response to this lack of financing, the Prisma MFI has broadened its range of products, which in the past had always been based on group loans of an average amount of close to 500 EUR. It has now therefore established an individual loan to enable its members to develop their agricultural activities.

A workshop has been organised with cocoa experts to collect the key information related to cocoa production (production costs per hectare, cropping calendar, risks, etc.).

Some 140 loans have been disbursed in the three agencies of the Prisma MFI. ADA’s next mission, to be carried out in November 2018, will be to review these initial loans with the MFI’s staff so as to decide whether any adjustments need to be made for the pilot phase.

At the same time, the MFI is introducing a loans analysis system thanks to a digital application which has been specially adapted to cocoa production. Loan officers will be trained between now and the end of 2018 to test the application in real-life conditions.

Although proving agricultural loans may be highly risky, this risk is reduced significantly if the financial service is accompanied by technical support, which is one of the advantages of the Chova Chova system, which will enable the MFI to quickly identify the producers which are implementing the good farming practices to maintain their parcel of land.

The success of this project, therefore, is dependent upon good coordination between the NGO which is responsible for providing the technical assistance designed to promote better farming techniques and the MFI responsible for financing the production of small cocoa producers.

An evaluation will take place in autumn 2019 to take stock of the two main aspects of the pilot phase (technical assistance and financial services) with a view to determining the next strategic approach to be given to the project. 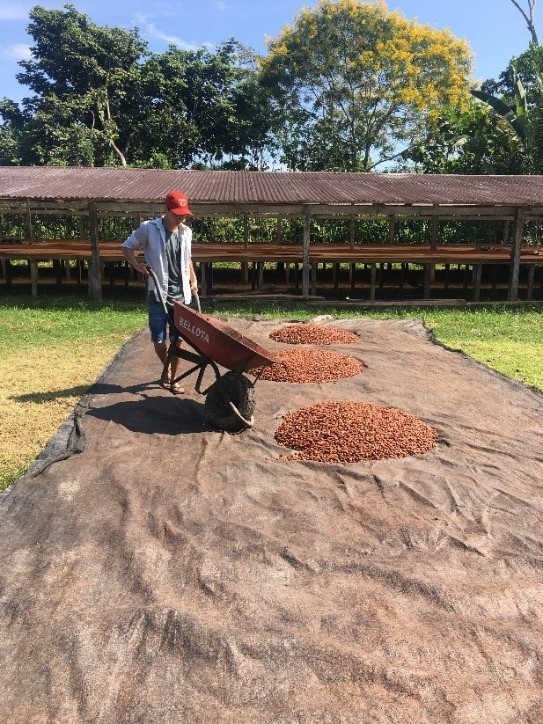 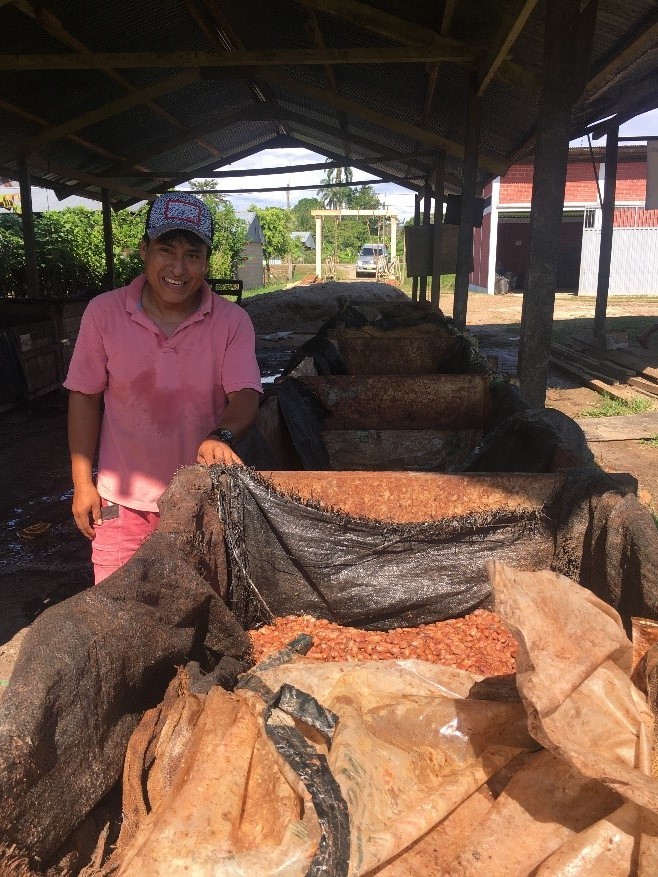 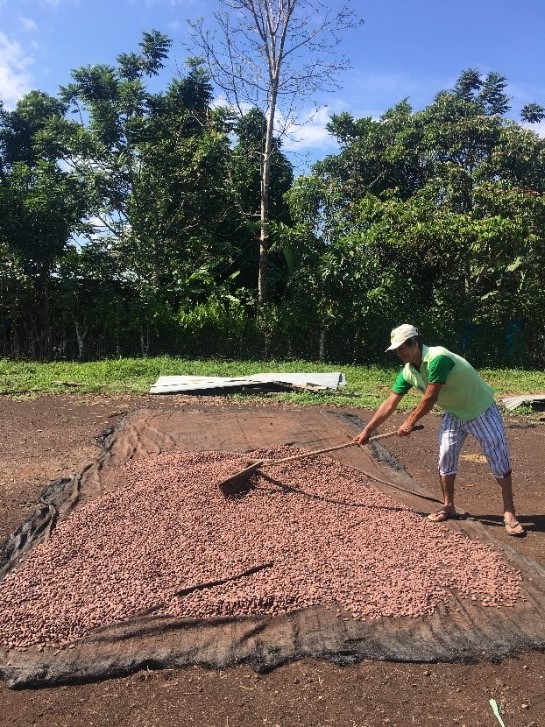 The farmers make the most of the long hours of sunlight to dry the coffee beans. 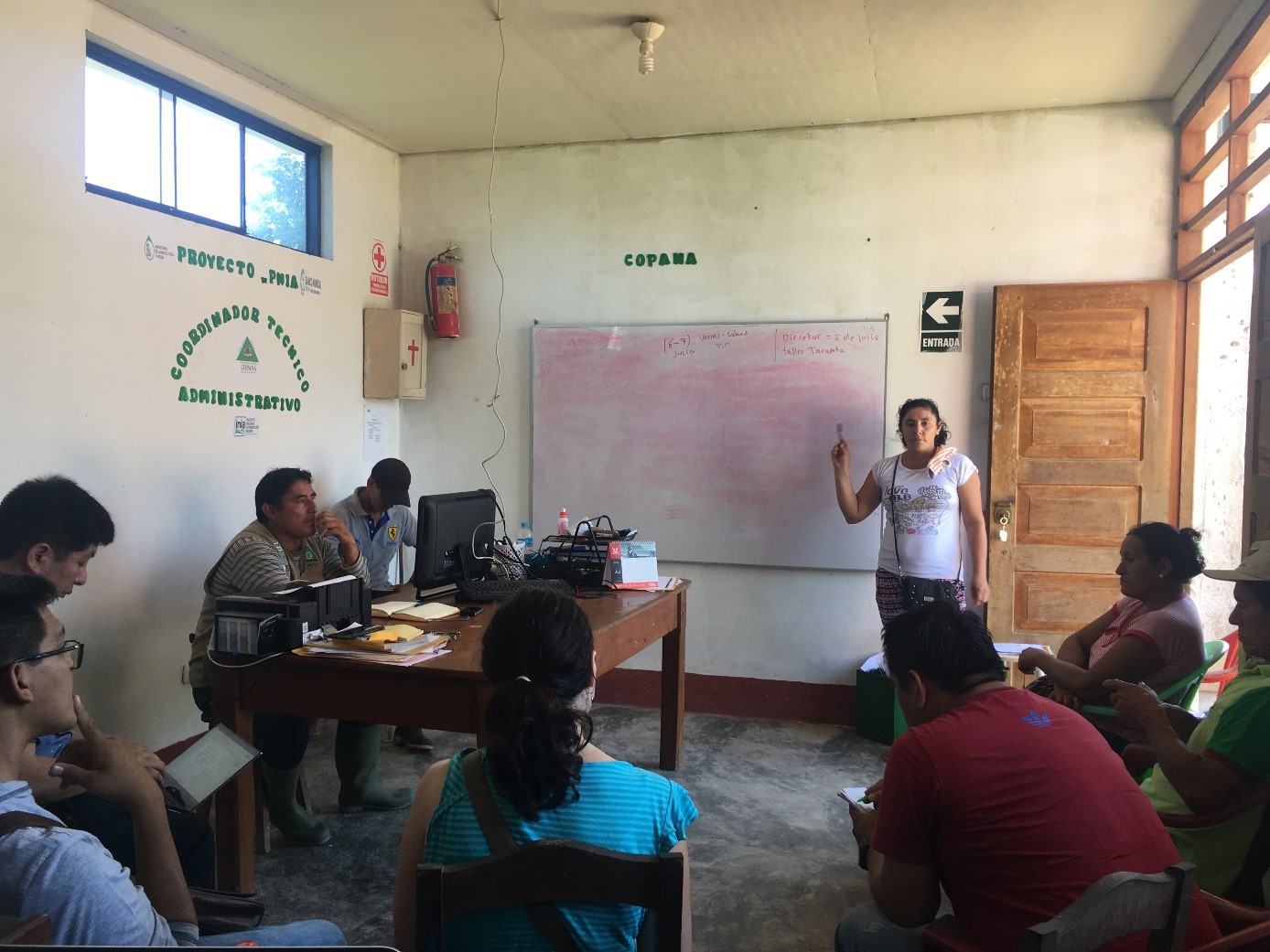 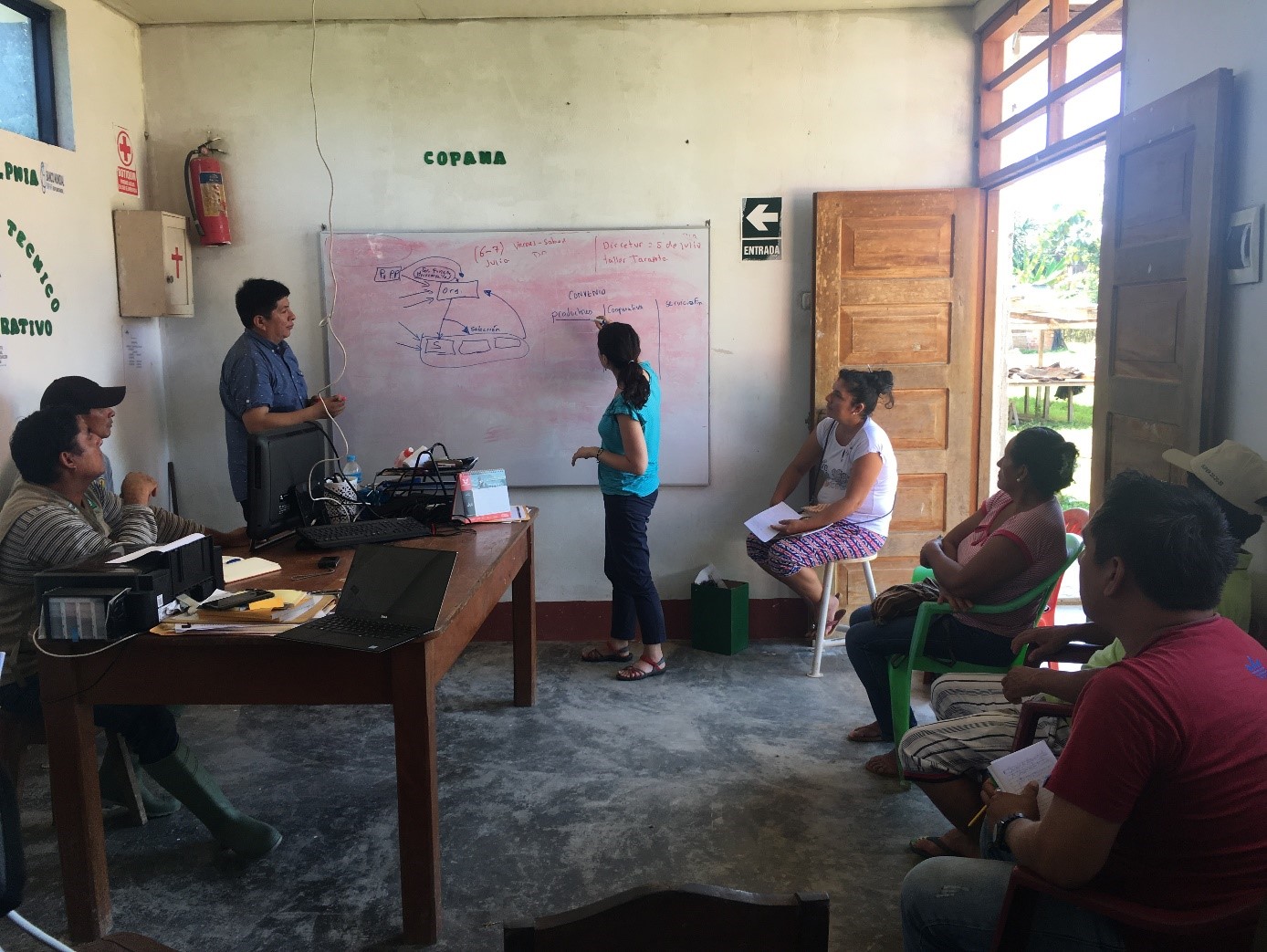 During the meeting, Miguel and Marina describe how the Chova Chova project works to the members

“This is genuine aid for the farmers”

Marco Antonio, one of the oldest members of the cooperative, is optimistic: “I don’t think that there will be any resistance to joining the Chova Chova system. This is genuine aid for the farmers and real aid is what they have always asked for. The bodies which came here in the past always presented an already established strategic plan. You, on the other hand, have come to us with the outline of a plan which you would like to develop with us. And that is exactly what should always happen”.

He also feels that the Chova Chova method could prove itself to be very useful if a field is contaminated with parasites. “We have seen that the best thing to do when a field is contaminated is to clean it by cutting down all of the plants. My wife Lena and I have recently had to cut down all the cocoa plants on two hectares of our land for that very reason. If the Chova Chova group had already been in place, it would have taken less time and I know that we are not the only farmers in the region to encounter this problem”. 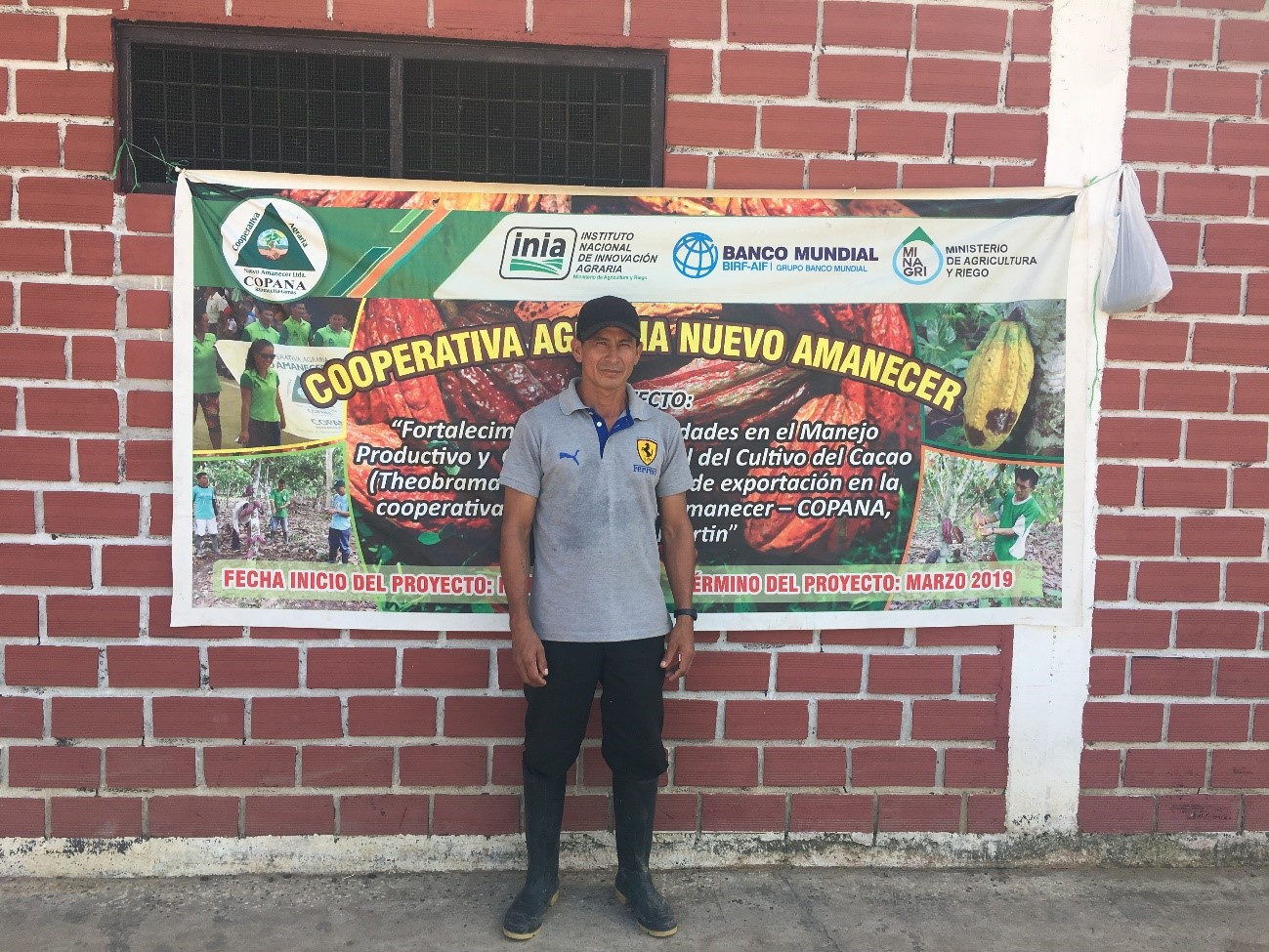 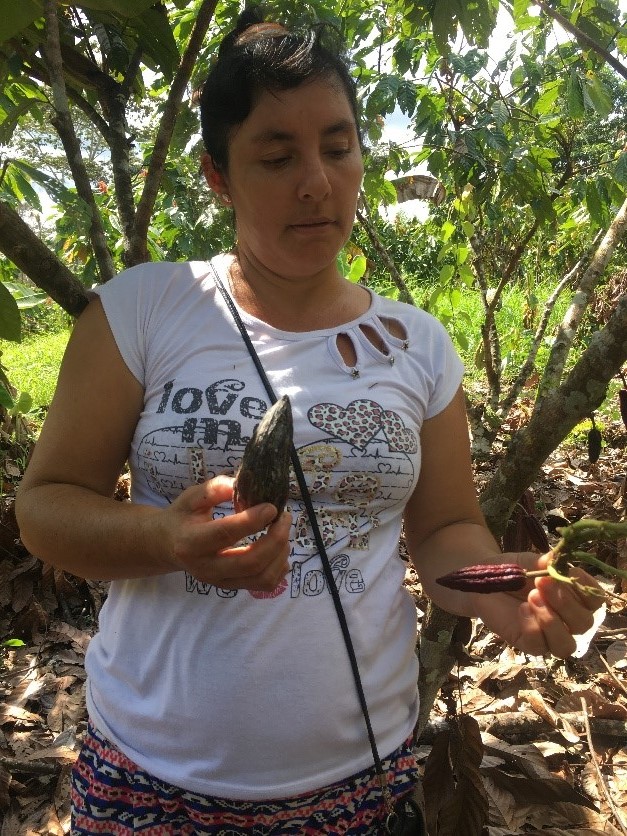 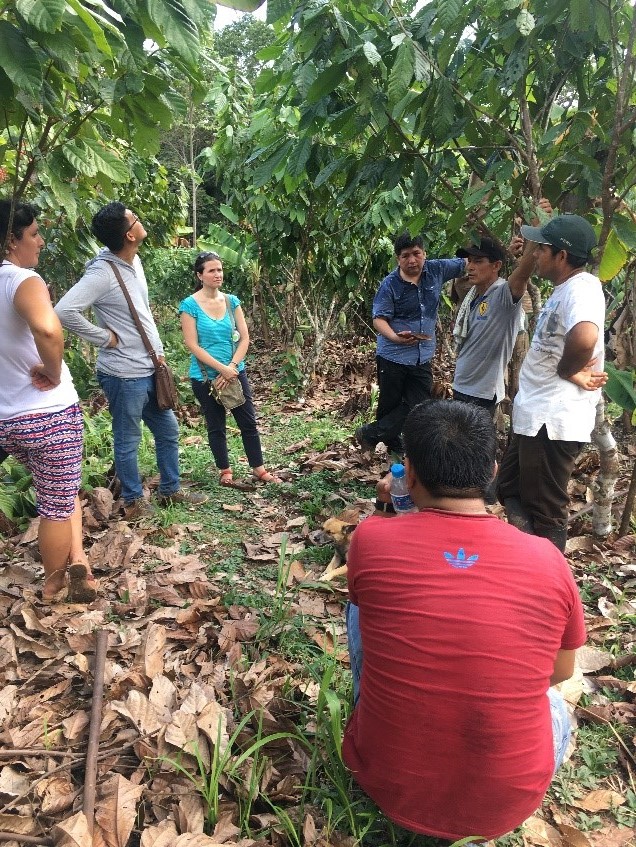 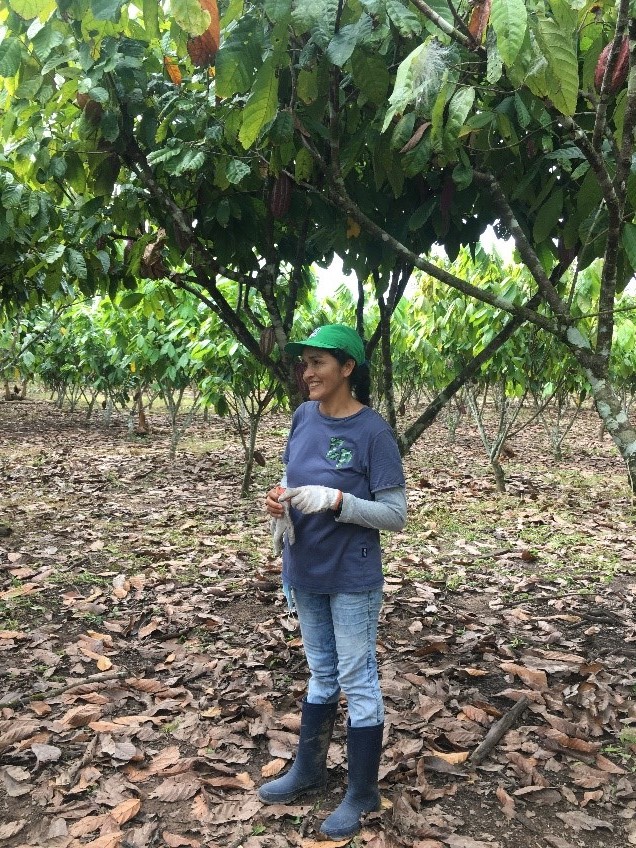 The meeting ends on a positive note. It would appear that everyone wants to move forward in the same direction.